After a tough final race in 35 knots of wind, Skylark has won the Copa del Rey de Barcos de Epoca 2012.

The regatta, in its 9th edition, started in beautiful sailing conditions of around 15 knots and flat water. Skylark, helmed by her owner Tara Getty, fought for clear air on the first beat having been tacked on by Manitou then lee bowed by Mercury. After a fast power reach on which Skylark flew her mizzen staysail, a gybe and run ensued. Half way down the run Skylark rode the stern wave of the larger, faster Amalia which increased her downwind speed by over a knot. She maintained the tow all the way to the finish, placing 3rd on corrected time, three seconds behind Manitou and 12 seconds behind the winning yacht Leonore, helmed by Italian America’s Cup skipper Mauro Pelaschier.

The second race was a long coastal course to a mark halfway up the coast of Menorca and back to Mahon. Skylark started at the Committee Boat and immediately enjoyed a right shift in the wind which lifted her above the fleet. As the breeze increased from 20 knots to 25+, Skylark powered upwind into waves which grew larger by the minute. Under No.3 headsail and full main which were perfectly cut for the conditions, Skylark sailed parallel with the faster Mercury and out pointed the larger Argyll. By the weather mark the conditions had deteriorated rapidly with the true wind rising to over 35 knots and steep breaking seas. As Enterprise lost her mast, Skylark rounded the top mark just behind Argyll and just ahead of Mercury. These two faster yachts pulled ahead on the fast run home, surfing down the breaking waves. However, Skylark remained in contacted with them and gybed early close to the entrance of Mahon harbour. This closed the distance between the yachts to a few hundred metres. Skylark eventually reached the finish in the harbour only two minutes behind her larger competitors. On corrected time, Skylark won the race with Manitou having retired and Leonore breaking two halyards and a headsail. Due to the extreme conditions, all further racing in the event was cancelled. 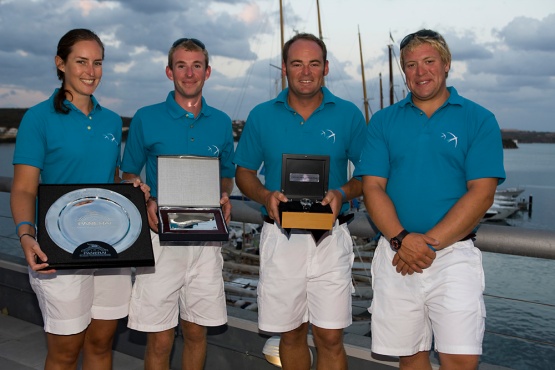