“The most beautiful regatta in the world” are the words most often stated about Les Voiles de Saint-Tropez. Held each year on the French Riviera, it is a celebration of the world’s most beautiful boats – both classic and modern – and the party scenes and lifestyle ashore is second to none.

In addition to all the beautiful sailing boats, many of the biggest and best motorboats also gather in support. These include the latest modern and contemporary craft, as well as classic motor yachts such as Shemara, Haida and Talitha, once owned by the Bee Gees impresario Robert Stigwood.

For the 2019 event Skylark again faced Cippino II the Argentinian boat that has an almost unbeatable record. Blitzen, Argyll, Stormy Weather were all also competing after a long season of events around the Mediterranean.

The conditions for racing through the week were unusual and, whilst Skylark performed well on some days and less well on others, her overall result was not the best of the year. One notable race, Race 3, Skylark had an incredible start and sailed away from the whole fleet of 42 boats. Two thirds of the way through the race she was caught on the wrong side of a wind shift and lost all of the significant lead that she had gained. It was a painful way to end the season having performed so well and all the other events.

That said, and in summary, the 2019 season was amazing. A lot of fun and results that were some of Skylark’s best yet.

Aerial of Port of Saint-Tropez 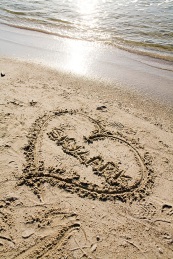 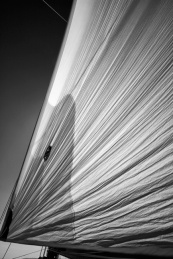 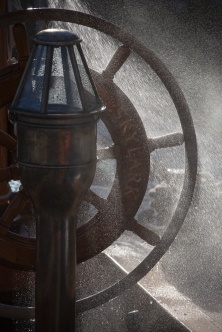 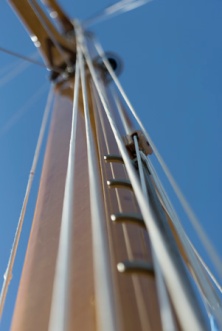 Year on year the BlueBird Cup is gaining momentum and growing larger and stronger. Its 9th Edition on the Golfe of Saint-Tropez was no exception. With the added support of Leading Hotels of the World in 2019, joining the line up of luxury brands Hennessy, Bentley, BOYD and North Sails, the event was the most exciting yet.

The BlueBird Cup itself was raced between Stormy Weather owned by Christopher Spray and the defending Skylark helmed by the talented yachtsman and international sailor Tara Getty. The Challengers Race, to decide the 2020 event, was run between Havsornen, chartered and helmed by Nick Barham, the 54ft Blitzen owned and helmed by Sir Charles Dunstone, Argyll owned and helmed by actor and comedian Griff Rhys Jones, Manitou owned by Hamish Easton, Moonbeam owned by Carsten Gerlach. As in previous years, the contemporary race boat Spectre, owned and helmed by Peter Dubens, participated as an honorary guest.

Sky TV filmed the event from a helicopter during its filming of the drama ‘Riviera’.

The Challengers Race was first to begin, with the start gun fired by Bubbles from onboard the magnificent 104ft BlueBird which defined the startline. The other end of the start was defined by the huge motoryacht Talitha.

The race was a pursuit event with the respective handicaps for size built into the different start times. Skylark was the scratch boat and led the fleet across the start in very light wind which worked against her. As the breeze died away Stormy started making it advantageous for the larger, faster boats starting behind.

A big wind shift then closed the gap between all the boats, followed by another shift which was nearly 180 degrees. Considering the massive changes in wind direction and strength, it was a near miracle that all the boats arrived at the first mark at the same time, having taken radically different courses and wind speeds to get there. Essentially, the race started again half way through which gave advantage to the bigger boats.

Coming into the last leg to the finish, Argyll was in the lead and looked a likely winner. But the weather turned events on its head once again and metres before the finish Nick Barham and Rupert Cleavley on Havsornen snuck ahead to cross the line first.

Then followed the BlueBird Cup race itself. After some circling before the start where the boats competed head to head, Stormy won the start convincingly and from that point Skylark struggled to over take her. Whilst the gap between the boats closed to a few metres, Stormy extended on the last leg crossing the finish over a minute ahead of the turquoise crew on Skylark.

At the prizegiving onboard of Talitha, Leading Hotels of the World presented fabulous awards whilst Hennessy presented its 100 year old Paradis Imperial cognac and Bentley invited owners to loan its latest cars. Each competitor was then presented with a commemorative BlueBird Cup 2019 polo shirt made by North Sails. It was a fabulous occasion. As BlueBird weighed anchor in the setting sun, “The Best Day of the Season” was declared by all. A fitting tribute to a fabulous event. An amazing occasion enjoyed by all who attended. Stormy Weather, worthy winners of the 9th Edition.

Skylark is uniquely featured in an interactive App called BOYD Yachting Lifestyle which is free to download to your iPhone and iPad from the App Store. Touch each crew member to hear their role on board – includes audio from her owner Tara Getty and video footage from the Panerai races – it’s the first interactive production on a classic yacht EVER! Click here to download the Skylark experience now: https://itunes.apple.com/us/app/boyd/id561408995?mt=8 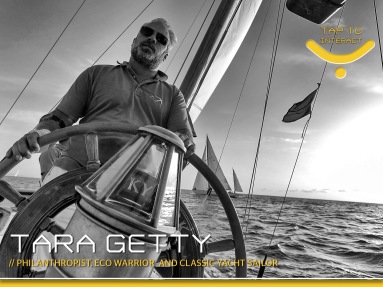 Beautiful full page helicopter picture of Skylark racing in Mahon, Menorca has appeared in the April issue of Classic Boat Magazine in the UK. It’s interesting to observe the parallel trim and twist of her three sails which shows they are perfectly set by the Skylark crew.

The Christening of Skylark 2009

Following her full restoration, Skylark is christened at the NYYC Summer Station in Newport Rhode Island on the East Coast of the USA